Rie Kugimya is Taiga Aisaka's Japanese voice actor. She is often dubbed as the "Queen of Tsundere" because of her notable Tsundere roles.

Some of Kugimiya's prominent roles include Alphonse Elric in Fullmetal Alchemist, Happy in Fairy Tail, and Kagura in Gintama. However, because of her voicing of Tsundere lead characters such as Nagi (Hayate no Gotoku!), Shana (Shakugan no Shana), and Louise (Zero no Tsukaima) (all of which aired around the same time), some of her fans have nicknamed her the "Queen of Tsundere", or "TsundeRie" for short.

Other tsundere characters voiced by her include Lotte in Astarotte no Omocha, Taiga Aisaka in Toradora!, Iori Minase in The Idolmaster, and Aria H. Kanzaki in Aria the Scarlet Ammo. She has also contributed her voice to various merchandise such as with Mugen Puchipuchi Moe,  a virtual bubble-wrap popping game, and voiced various characters on a set of moe Karuta cards.

In 2014 She did the voice of Sena Kuroi anime series: Mangaka-san to Assistant-san to, like Tet No game no Life and One piece: Sugar 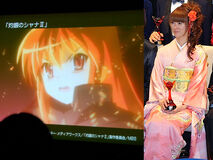 Add a photo to this gallery

Retrieved from "https://tora-dora.fandom.com/wiki/Rie_Kugimiya?oldid=15277"
Community content is available under CC-BY-SA unless otherwise noted.