The player assumes the role of Ryuuji Takasu where he moves around school and town, conversing with characters and working towards multiple endings as part of an original storyline.

The game also features a minigame where players play as Taiga Aisaka, fending off lovesick guys.

The English Patch for the "Toradora! Portable" is now available on the official website.

A spin-off of the popular Toradora! anime. Unlike in the original story, this time Takasu Ryuuji finds himself in a hospital bed. Confused and dizzy he's suddenly greeted by a short girl who calls him by a strange name. Is this his name? Who is this girl?

It's soon after that the shocking truth comes to the surface. Amnesia. Poor Ryuuji suffered an accident after Christmas eve and forgot everything about his past, his friends, his likes, his relationships, even his own name. As he leaves the hospital he meets up with all sorts of people who seem to be acquainted with him. A beautiful blonde girl who apparently lives with him. His best friends Yusaku Kitamura and Minori Kushieda.

The popular model Ami Kawashima and even his pet parakeet Inko. These people hold all of Ryuuji's memories and they are the key to unlocking his past. What will Ryuuji do? Will he be able to recover all of his past? An eventful journey awaits him as new year approaches and the new school semester comes closer by the day. Will he be able to remember everything before school starts? And if he does will anything in his new life change? It's all up to you to decide.

All Information included in this article are mostly from Fuwanovel.org, Forum #2668 - "Toradora Portable!" by the user Nosebleed.

This is a clickable content. Select your desired route for a walktrough.
© Namco Bandai Games © Walktrough;Fuwanovel.org user, Nosebleed 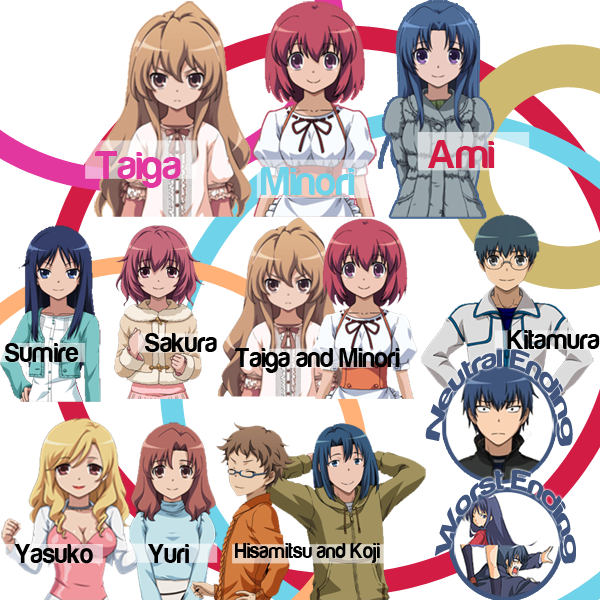 Navigation by Queennicolee
Retrieved from "https://tora-dora.fandom.com/wiki/Toradora!_Portable?oldid=16527"
Community content is available under CC-BY-SA unless otherwise noted.